“Worship is not just something we do on Sunday, but an entire way of life. Worship can be found in any act; the carpenter is worshipping when he builds a well-built house, the truck driver as he hauls his load. It’s not just songs on Sunday morning.”

Except…we behave as if exactly the opposite were true. No matter all the high-sounding language about the nature of worship, we really measure it something like this:

Be honest…if everyone just stands there, you think you failed, right? If everyone had their hands in the air, they were ‘worshipping better’. We’re gauging by audience reaction, by the physical demonstrations. So we rethink, retool, rewrite, rearrange, until we get more of that physical reaction. “Hey,” the pastor says in the lobby, patting us on the back. “Great worship this morning! Everyone was really singing!!”

But…but what about the non-demonstrative people? Seriously—are they not worshipping? I’m not a demonstrative person, at least when I’m in the audience. You can’t tell from looking at me whether or not I’m ‘worshipping’–which just begs for a definition, doesn’t it?–but if I and the rest of the non-emotive types don’t…emote, you know what’s going to be asked in the Monday meeting:

Why didn’t they worship, and what can we do to fix it?

I used to ride with her to church on Wednesday nights, and we’d pick up a woman named Karen, who was mentally challenged. My mom faithfully brought her to church every week. She did lots of that kind of stuff. When my mom died I was going through her stuff, and found, in the nightstand next to her bed, the prayer list from her church, and a magnifying glass. My dad said many, many nights he’d walk past the bedroom and see her on her knees by the bed.

But too bad she never worshipped, right? Too bad she missed out on the thing we all need, the thing that’s constantly preached as an absolutely foundational, essential, irreducible part of the Christian walk—worship. And worship as strictly judged by the emotional response during the service. If not in theory, then certainly in actual practice.

Isn’t that why we look to the Worship Gurus? We look to them for the secret—the secret to getting the same response they do, because THEN we’d be worshipping. Then we’d REALLY have something!

So what we need is a fool-proof way to judge the ‘level of worship’ in a person’s life, or in a congregation—and you’re in luck because I HAVE INVENTED THE ANSWER.  Last night I ate a huge burrito at 10:30, washed it down with two liters of Mountain Dew, and then went right to bed. About three hours later, the answer came to me in a most unmistakable way, in a dream of startling revelation! 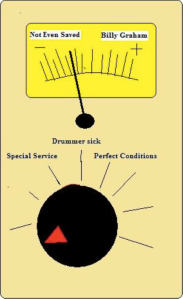 I can’t tell you exactly how it works, because it’s a special revelation made known only to me, but there can be no doubt—I mean, I dreamed the whole thing!  In fact I got up at 2:45am, went right to Legal Zoom, and started an LLC. Then locked up worshipometer.org. (& com. & net). You can’t be too careful.

It’s a hand-held device, and can be operated by anyone—even a Lutheran. Think of it! No more wondering whether or not your worship set is effective! And for those of you who are worship directors, and are being judged directly by how much ‘worship’ is going on, I have a special deal for you: send me an extra $10 on top of the regular, low cost of $39.95, and I’ll send you one that’s specially set up by me to read a little higher.

Don’t miss out on this!

Got something to say? Go for it!